How Brazilians Cure a Hangover and other Jet Set Travel Tips

Lorenzo Martone made his name as publicist for such models as Victoria’s Secret angel Alessandra Ambrosio before turning a passion for bicycles into a successful business. In 2012, he started Martone Cycling Company,  selling luxury bikes and accessories online and at such stores as Los Angeles’s Fred Segal and Colette in Paris. Martone’s latest product is a limited-edition rose-gold model of his standard MCC bike. 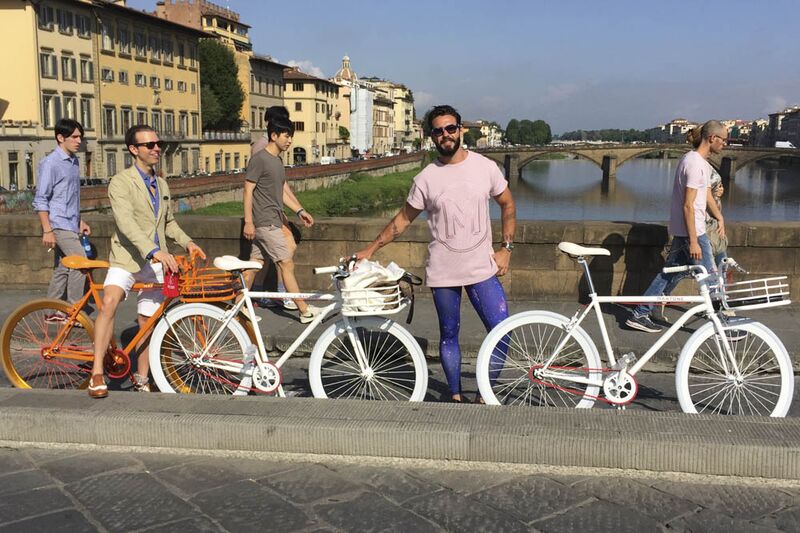 Martone lives in New York and says he flies around 500,000 miles a year, mostly on American Airlines. It’s “the only airline that makes me feel like a millionaire—and that’s the only type of millionaire I am,” he laughs. “In miles.”

Want to tune out noise on a plane? Make like a construction worker.

I’m a light sleeper, and my search for earplugs started from me sleeping with men who snore—I’ve had multiple boyfriends with a serious, severe snoring problem. And the travel experience is so noisy for me, too; airlines have become flying buses, where you come across lots of people that don’t really know how to behave when sharing a small amount of space. So I need good earplugs, and not the ones they give you on the plane. I researched the brand that construction people use, and I use those, which are custom fit to your ear: Radians. But because the airplane itself is so loud, I add a pair of Bose earphones on top of that, even if I’m not listening to music or watching movies.

Always have an emergency kit and make sure it’s stocked with these four things.

I never leave home without my passport. I remember I was living in Europe, in Paris, and it was one of those casual dinner situations, where friends of friends decided to go to Ibiza right away for the opening weekend of lots of clubs. I couldn’t go, and I regret it. So now, even in the U.S., where I can travel with my driver’s license, I always make sure to bring my passport in case someone has one of those ideas.

And I pack my “What if I bump into a crazy rich friend with a jet?” kit. It consists of some scandalous swimming trunks—I’m Brazilian, so I’m very comfortable in Speedos all day long, and I’m not ashamed of going to the supermarket shirtless—and my sunglasses and hangover pills, Engov. You can buy them over the counter in Brazil, in a gold package that looks like a condom package. You’re supposed to take one before you start drinking and another one after, but it’s really hard to remember. I take one when I’m feeling the pain of the hangover, and it always works. I learned about it from my parents who said, “You’re going to be having a big night—here, we don’t want to hear complaints about your headache tomorrow,” Every time I go to Brazil, I have more and more orders from friends. It’s like I’m trafficking Engov.

When in St. Barts, do as the locals do.

I’ve been going to St. Barts with my best friend [and ex-fiancé] Marc Jacobs for maybe seven years now for Christmas and New Years. Don’t be scared—people look up the airport online and see the two little mountains the plane has to go through [to land], and it looks scary, but you get used to it. There is a big New York City art collector slash real estate mogul slash Russian billionaire crowd, but I like that you can make out of St. Barts whatever you want—there’s also a very local side to it, a very islandy Caribbean vibe. There is a place only locals go called Le Select, right in the center [of Gustavia]. It’s been there forever, with a big terrace and plastic chairs; they only have burgers and beer. I always like going there, as it’s the opposite of so many other places on the island that are so frou-frou.

Always opt for an AirBnB over a hotel.

AirBnB has a filter that tells if a place is only for AirBnB or if someone lives there. Most people prefer to go to AirBnBs where there’s no-one [in residence], but I think the opposite. I don’t want to be in a plain apartment decorated with Ikea furniture so it can be rented on AirBnB; I want to open a fridge and see what people eat. I was going to Tel Aviv in the summer of 2014, and all my friends canceled at the last minute, so I found an AirBnB in Yafo, a local neighborhood that wasn’t very touristy. I was on the way up the stairs to the third-floor apartment, and I smelled this delicious cake being cooked. The woman was literally waiting for me, baking a cake—and she was pregnant, very pregnant. I asked when it was due, and she told me, “Tomorrow.” I said, “Oh my God, girl, get outta here—what are you doing?Æ 24 hours later, I’m receiving baby pictures, and we’ve kept in touch since then. I even got to meet the baby.

When in a new city, consider exploring by bicycle.

What I love about Tokyo is that you can bike on the sidewalk legally. It’s an interesting experience, as you’re among the pedestrians, and the place is so packed, but they don’t care, and they don’t complain about stepping aside for the bike. People are scared of biking in New York because of the traffic, but I think it’s crazy, and so fun. I love the Lower East Side in New York, especially Forsyth Street, because it has a bike lane in the middle, and it’s very green. That area, the new Chinatown, has such a strong character, and it’s full of new small art galleries I love.

How to travel with your dog.

I started traveling with my dog, Mia, when she was a little puppy so she could get used to it. She is an emotional-support dog—my doctor wrote me a letter that I needed her as an emotional support, because I think I sounded crazy enough when I talked about how attached to her I was. So you need to call and make sure that the letter is in your booking on your airline of preference [so you can bring the dog on board]. The best airports have cute dog relief areas now, too: There was a very cute one in Dallas, and the airport that’s most pet friendly is San Francisco. They love dogs there, and there are lots of signs. I say, if you’re going to fly with a pet, fly via San Francisco.